There is no greater loss than that of a child. If this tragedy has befallen you or a loved-one, please call Sacred Crossings. We will hold you with the utmost care while you navigate this impossibly difficult journey and, if you choose, bring baby home for a vigil and home funeral.

Although difficult to imagine, studies prove that holding and caring for your baby will assist you in integrating the tremendous loss and begin the grieving process.

Please watch the 2-minute video below and read Emma’s testimonial as she describes how a home funeral helped her survive the stillbirth of her son Darrius. 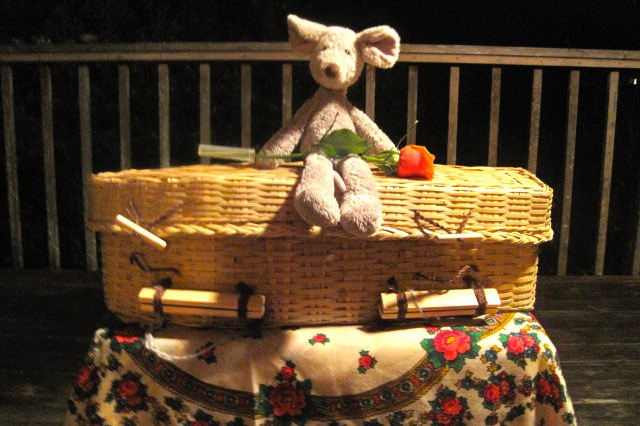 “Having a home funeral gave us an inexpressible gift that I will cherish for the rest of my life. When our baby died at birth, it was the most shocking hit to my world – I only got to hold him hours after he was born, when the doctors said there was nothing more they could do. Holding him was the most beautiful and exquisitely painful experience, because finally I could see that he was really there, but I wouldn’t be able to keep him. Then they had to take him away to the coroner. Letting him out of my sight and my arms felt so utterly wrong.

So in the days that followed, Sacred Crossings offered to come and give Darrius a home funeral, it felt like the only right thing to do. I will never be able to put into words how Olivia’s presence, so peaceful, comforting and reassuring enabled us to make this one of the most beautiful experiences imaginable.

As a family we prepared his body for the service, and anointed him with myrrh and frankincense and dressed him. I had never been so close and intimate with death, and never even really thought about it tangibly, but with this new world we found ourselves in, I realized there was no fear…only profound love and the strength given by all our family, friends and loved ones. We were encapsulated in prayers and grace during those days, and when it came to the actual service, all that was magnified times a million.

We would never have imagined that such a short life; 9 months inside my tummy, could impact so many lives.  We made prayer flags for him, and in this way everyone was able to express their feelings and wishes, in a way that brought color and sacredness, and healing…in the days that followed we were able to read them all and feel the depth of love that surrounded Darrius and which he brought to us all.

Sacred Crossings helped us to do everything we could have done to send our son in peace and with our blessings and love. We formed the beginning and the end of the circle around him, and in a way that we have no regrets; nothing was left undone, and even though I still feel his loss as much as I did that first moment, I have peace, because everything we did with and for him was of love and sacredness. The value of that is beyond words, a treasure I can recall every time I remember that very special day.

If there were ever a perfection attainable to being there and yet not being there, of guiding and yet standing back, of choreographing something on seen and unseen levels, so that grace is present, then Olivia and Sacred Crossings has attained that. “ — Emma Drewry